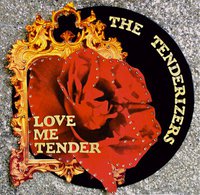 Don’t judge this album by its naff cover alone. On first look, glance you’d be forgiven thinking this was some weird pycho-billy rocker outfit. Yet listening to John Newton’s Tenderizers, you’re more likely to think it’s a Roger Whittaker impersonator at a Jim Croce’ tribute concert. Recent press has built up Newson as some kind of Kiwi version of Paul Kelly. I wouldn’t go that far. However, tracks like Weedkiller Waltz and Crosscut Saw are gorgeously layered back-country narratives with compelling lyrics and harmonies that creep slowly into the subconscious. Clearly this is an album from the Mainland with bitter sweet pastoral vignettes like Heartache and Sorrow Girl’s town. The latter, by the way features some pretty mean harps and nice grungy, bluesy guitars. In Mr Fatboy Newson conjures up a lurid, small town melodrama with sleazy cat praying on all the unsuspecting at a local square dance. Whittaker’s discovered Nick Cave, it seems. But joking aside this, is a great collection, despite being sold woefully short by its packaging. Well worth multiple listens.