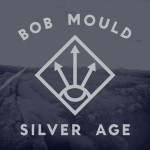 For publication in Groove Guide September 2012

“Silver Age is exactly what it appears to be: It’s 38 minutes of rock,” Mould told Rolling Stone recently, “People can feel free to parse the songs and make what they want of them, but I didn’t really have any agenda there.”  Really Bob, that’s unlike you.  I still have strong memories of 1998’s Last Dog and Pony Show, which is effectively a chronicle of a man from relationship break up (‘Moving Trucks’) through to paying for sex (“Skin Trade”) and trolling for new love (“Classifieds”).  Since then the former Hüsker Dü’ guitarist has dabbled in wrestling (as a commentator), various disco dj projects (embracing his rainbow side) made experimental lo-fi electronica (“Body of Song’, and the Hub Cap album) and returned to his trademark axe grinding.  Now days’ Mould’s more about raising his pulse than baring his soul.  After all, he’s just dissected his own life in last year’s memoir See a Little Light: A Trail of Rage and Melody co-written with rock journalist Michael Azerrad.  So it was time become re-propulsive.  And what we have is classic ‘Sugar-era’ Mould.  Silver Age is full blasting, hi-octane catchy pop with only brief traces of electronic noodling.

Of course it’s no coincidence that Silver… turns up 20 year’s after ’92’s Copper Blue, which has just been reissued and Mould has been touring stateside in its entirety.  He told Time recently that for the title track “there wasn’t a lot of deliberation about (whether) I’m going to write a song about age or aging. It was just sort of a snotty song”.  Mould’s been pretty upfront to suggest that Silver…is really a “companion piece, something that would complement the sentiment of Copper Blue”.  And it’s no coincidence either that he’s roped in his touring band drummer Jon Wurster (Superchunk) and bassist Jason Narducy(Verbow, Spl:t S:ngle).

“Star Machine” begins brilliantly, with the kind of sonic assault that only Mould could conjure up.  The title track carries on the mission with a force not really seen since Copper blue and their even more brutal Beaster ep.  “The Descent” is possibly the closest to the aforementioned introspective, except given the aesthetic, Mould’s form of navel gazing will always have hari kari and the blade in his peripheral vision.  For a happy man he’s still sufficiently grumpy to make this stuff work well on acetate.  At times the guitar work becomes a torrential force, like on tracks such as “Steam of Hercules,” arriving in layer upon layer of sonic maelstrom. Also worth mentioning is” Angels Rearrange” which reminds me of the Hüsker’s earlier Flip Your Wig, one of the first albums that the band really hadproper control over.

Control is important to Mould.  Some would say he’s been in control writing, recording, and playing for over three decades. So this is really just another exercise in control and punishment.  It’s loud, calculated but still remarkably melodic.  Whilst other bands like Sonic Youth did their best to write the perfect pop song and then artistically trash it, Mould’s talents lie in his ability to write the sweetest music and then terrorise it within an inch of its life.