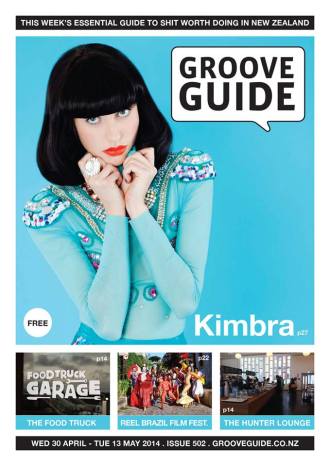 The drive from Wellington to New Plymouth took considerably longer than expected. By Hawera I was getting really concerned we weren’t going to make our 2.30 appointment.  Beside me, my daughter McKenzie, my ‘cub reporter’, was frantically texting the WOMAD publicist to buy more time.  Despite ticking clock and the speedo needle rising rapidly into the illegal section, Mckenzie sat calmly reading out stats and facts about our interviewee.  A little over two years ago, she reminded me, just like Lorde, most of us hadn’t heard of Kimbra Lee Johnson.  Yet when she was nominated, along with singer-collaborator Gotye for a Grammy for the song “Someone I used to know’, we all sat up and took notice.  What is it about Kiwi female singers that captures the world’s imagination?  Perhaps it has something to do with that DIY mentality that we all grew up with.  After all Kimbra wrote and recorded her debut Vows in her Melbourne flat and a minuscule studio in North Richmond.  “It was the product of many, many ideas, all fragments and tiny little snatches of songs,” she told us later in the tranquil garden setting of New Plymouth’s Nice Hotel.  With second’s to spare, we’d thrown the car into the nearest park and sprinted up the hill to the venue.  Whilst we were a little flustered, Kimbra, on the other hand, was relaxed and composed.  Dressed in a green refashioned vintage dress, hair and makeup conservative but still glamorous she was completely different from from outrageous stage persona. “I feel it’s important to sell my music up there, it creates the illusion and fantasy which is important.  It’s part of the whole package.  Wait to you see my show tonight!” she promised, “that will surprise you!”  And it did! Performing for the first time at WOMAD, Kimbra arrived in royal style dressed in a shimmering white synth-fibre cloak, high heel fluffy slippers and a multi coloured tutu.  “We’ll play a number of songs from Vows a little bit differently tonight, not so people feel uncomfortable but definitely challenged. Plus I’ll add in a couple of new ones from the album I’m making.” Ah, yes the new album.  Kimbra tells me she’s been holed up in LA working with a variety of collaborators including Daniel Johns, Dave Longstreth (Dirty Projectors), Reuben Neilson (Unknown Mortal Orchestra), and abstract beat wizards Flying Lotus and Thundercat, who she’s raving about today.  “He’s got these amazing beats; each artist adds something of their own to the record.  I didn’t just want session musicians who’d play what I wrote.  I got inspired by those around me.  Daniel and I were into the electric harp, so we sat around all day playing little tunes, working out different sequences, until stuff stuck.  I also got (soul singer) John Legend in for a number – I like to have variety, to mix up ideas within songs.”  Kimbra has described her work as ‘pop-prog’  “I get asked that a lot”, she laughs, “I mean – it’s a combination of weird time signatures, classic girl-group sing-alongs and progressive, experimental music.”

Mckenzie, who’s sitting next to us is bursting to ask her when she got into this kind of music. Kimbra tells her about working away in her bedroom on little songs on her guitar, songs about rainbows and dragons.  She still does this, teasing out little “monsters” tunes and ideas that will come to something down the line.  Her collaborations and experiments are her inspirations she tells us.  “I still love timeless music with a strong melody but experimenting is where the edge comes in.”

Kimbra’s new album is a sort of journey involving multiple locations. First, she with ‘Wally’ deBacker (Gotye) in a Melbourne, with a “huge bunch of cool instruments like Critter and Guitari pocket pianos, Yamaha strings and stompers, and all this (great) stuff he collects up.”   Then after flying over to the States for the Grammys she set up shop in LA.  “It’s a very glossy town for a Kiwi.  Everyone’s and actors,” she laughs in a false Californian accent. “I was just hangin’ out to meet a plumber, you know?” Relocated, she began writing beats, inspired by Flying Lotus, who eventually contributed, and built up a “palette of music” to ping-pong around producers and collaborators, including Silverchair’s Daniel Johns.   She met Johns as part of an Adelaide festival project, which involved a 35 piece orchestra, a week of song writing and learning Bulgarian vocal scales.    She’s on record as calling it all a “3 day psychedelic experience.”  That work was for Johns’ solo project but the experience was so positive Kimbra called him over to LA to help her out, where she’d been working with producer Rick Costey.  Others to walk in include The Mars Volta’s Omar Rodriguez-Lopez and The Dillinger Escape plan, especially Ben Weinmen who laid down some funky Latin guitars on a few tracks.  Also involved were Morris Hayes (keyboardist for Prince’s New Power Generation) and John Robinson, who’s probably the recorded session drummer ever.  Despite the large number of players Kimbra claims that her studio did not have an open door policy.  “Part of being in that town was about getting in all this creativity, its inspiring.”

That night McKenzie saw Kimbra on stage for the first time. Her outrageous vocal gymnastics and flamboyant costumes brought a high level of drama to the WOMAD stage that knocked the socks of at least one little girl!  LA has been a creative time for her.  Two new songs in her set show the  promise of more edgy, schizophrenic pop, setting expectations high for her new album, which Kimbra promises will be here soon.  And that, no doubt, will be worth breaking a few more road rules for.