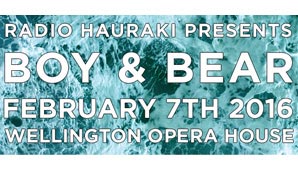 Aussie folk-popsters Boy and Bear (Dave Hosking (vocals /guitars); Killian Gavin (guitars/vocals), Tim Hart (drums/vocals), Jon Hart (keys/vocals) and Dave Symes (bass/vocals)) kicked off their Australasian tour on Friday 22 January in Tasmania, in support of their third album Limit of Love.  Tim Gruar caught up with their drummer, Tim Hart on the line from Hobart, a couple of hours before the first show of the tour.  Boy & Bear started 2009, as singer David Hosking’s solo project but with success on Triple J’s ‘Unearthed’ quickly became a five piece. After doing what Hart calls “about 100 small gigs with only our relatives turning up” the band gained enough clout to sign with Island Records Australia, releasing the albums Moonfire (2011) and Harlequin Dream (2013).  Both enjoyed top ten successes in Aussie, powered by hook laden folky tones with clever, comforting structures reminiscent of Grizzly Bear or a rockier Band of Horses. Their third effort, released in October last year, is a departure from the safe, digital recording environment they’d been used to.  This one threw them in the deep end.  Exploring the parameters of a concept is always challenging.  “The Limit of Love”, explains Tim Hart, “is a sort of construct.  We’re exploring idea of day- to-day love, not that mushy good feeling stuff.  What people do things for each other, each day.  We not interested in superficial love.  For Dave (Hosking – the band’s main lyricist) it’s a reflection of what he sees around him.”  Hosking’s on record as saying “I’ve seen lots of friends lose themselves while searching for love.  Everyone needs to be loved.  When people don’t get their fix, it can drive them to do strange things.”  Hart agrees, “Like a drug.  We’re all looking for our next hit but we often miss all those little things, like what family and friends do for us.” And of course there’s the more sinister behaviours, like stalking someone, or even murder.  “Yeah, people can go crazy out of love.  It’s a great inspiration for a song writer.”

Speaking of songs, Hart, who also has his own solo folk project, grew up with 70’s West Coast folk-pop like the Eagles and Crosby, Stills, Nash and Young.  He was really keen, this time for the band to try out a recording process that returned to the ‘sound’ of that era.  “I love that warm, live sound.  Not everybody played perfectly, but the takes were honest.  No Pro tools back then.”  In April last year the band teamed up producer Ethan Johns (Ryan Adams, Kings of Leon, Kaiser Chiefs) at Peter Gabriel’s Real World Studios, a 200 year old water mill in Box, Wilshire, to record their third album. “It’s got this great history.  It’s where the ‘So’ record was made” (and is the home of WOMAD and Real World Records).  Hart loves the idea that some of the discarded instruments could be part of those sessions.  “It’s a bit of a ‘journey’.  You go through the gates and you’re on this big sprawling rural property.  Peter lives up on the hill.  Sometimes his paddles down the stream to check out what’s going on.”  “We recorded the whole album ‘live’, and straight to tape, no overdubs.  Because we were working with Ethan, we pretty much just let him do it his way.”  John’s style of production, Hart says, is very subtle.  “He knows what he likes but he didn’t have a specific agenda.  It’s how he works – subtle suggestions, ideas.  We’d only have one take to get it, so we’d spend more time rehearsing.  The idea was to get it right, but not perfect.  There’s a few tiny imperfections that just we know about.”  Hart particularly enjoyed it when Johns picked up his guitar and joined in.  “He does some ‘fleshing’ out on a few songs.  So polite, he’d ask and we’d be like ‘yeah, please.  Share your wisdom.  This was the man that recorded Laura Marling and Emmylou Harris!”

Great collaborations have been in the band’s stars lately.  After being nominated for a ‘J’ award for their last video, “Walk The Wire” (off Harlequin Dream), the band went back to Aussie production house Oh Yeah Wow (Goyte, The Paper Kites, Hermitude) to make the video for their title track which features a patient dancing in a hospital corridor.  As it progresses the scene repeats over and over, each time changing.  Deckchairs, sand, beach balls and other items start to appear until we finally finish at the beach itself.  “When we first saw this, we were really puzzled. But it became clear that this was about a kind of optimism of the human spirit that seems to persist even in the gloomiest places, even hospitals.”  I guess we’re all optimists, even in the face of adversity. Joining Bear & Bear for their New Zealand shows will be Kiwi star Eden Mulholland and Luke Thompson.