Influenced by artists ranging from James Brown to Daft Punk, Auckland outfit Tahuna Breaks have been making a mean mash up of funk, disco, soul, live electronica and roots for over 12 years.  They’re a group that have grown and contracted over the years, with live configurations varying between six and 10 members, always producing an energetic and raw live show.  By their own definition they are there to ‘put ants in ya pants’ and party.  This Saturday they play their last show – Ever!  Hailing from out West, Tahuna Breaks have released four albums and also a live concert DVD.  Regulars at major festivals and events has seen them touring both here and overseas, playing festivals like the Big Day Out, Rhythm & Vines/Alps, Splore, WOMAD and Homegrown.  The 13th Floor’s Tim Gruar caught up with the band’s saxophonist Jonny McClean to reminisce a bit.

It’s a bittersweet time he reckons but also a bit of a release, too.  McClean’s packing for London to do his OE before he hits his thirties but finishing up with Tahuna Breaks will be more like leaving day at the office.  I suggest that he should check out Ronnie Scott’s Jazz Club in Soho.  He might even meet Kiwi Jazzman Nathan Haines, who’s a regular there.  “I might.  Could be awkward, though.  I once tried to chat up his wife!  Aw!  You know Musos’s – always trying it on, eh?”  And he’s had plenty of time, too.  For McClean there’s been over 8 year’s worth of bars and festivals, opportunities for many brief encounters.  And it’s been a long, fun ride.  Shame it has to end.  “Yeah,” he tells me,  “This week end’s our last show ever.  But it may have just sold out, so you gotta love that.  We go out on a bang”.

Named after the West Auckland street where they first began jamming Tahuna Breaks originally started as an instrumental band in 2005, inspired by watching a local funk act playing at a nearby bar.  Back then the line-up was Marty Greentree (guitar/bass), Tim Gemmell (drums), James Winkle (bass/guitar) and Kelsey Serjeant (tenor sax). They began gigging at a nearby pub playing four or five original songs and a stack of improvised covers.  After saving enough pennies they piled into Auckland studio The Rock Factory to make a three track demo, one of which, Crisis Situation, got some airplay via Jason Kerrison’s show on Kiwi FM, and that was the exposure they needed to really get off the ground.  The following year the band recorded their first full length album with producer Andrew Buckton at Studio 203. Reflections contained a range of styles from funk, rock, soul, dub to drum and bass. In order to play the songs on the album live, the band recruited Tim Baker on keyboards and Tom Charleson on guitar and took on their first national tour during 2007. It was also the time Jonny McClean joined on alto sax along with Adam Fuhr on keyboards. 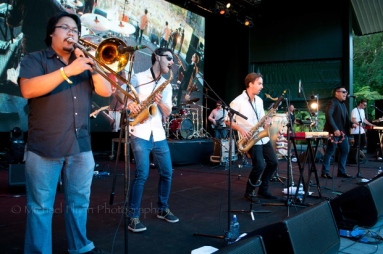 Personally, for  McClean, it’s been an ecstatic 8 year journey.  “I moved up to the big smoke (Auckland) after finishing Uni and went to (keyboardist) Tim Baker for a few beers.  Their saxophonist at the time, Kelsey (Serjeant), was heading to Europe, on a sabbatical, so they asked me to stand in for a gig or two.  “I was just starting my first job and I had to take time off to go play some international festivals.  But I was stoked to be in the band.  Before that I’d done a few things with high school bands but that’s pretty much it”.  That later led to a fully grown membership and some serious workloads on their album Black, Brown and White Brown & White’ (released in 2009). “Yeah we go into trouble for that video.”  He means the controversy that arose around the animated video for the album’s second single Giddy Up, which was a major hit Down Under.  Directed and illustrated by Leah Morgan and produced by Fish N Clips, the video featured a highly stylised sperm as the pinball in a whimsically sexual pinball machine and was initially banned from YouTube.  As a publicity stunt and protest, was uploaded to Youporn, where it garnered even more notoriety.

The band was at the height of its powers then, performing a number of large festivals and gaining a reputation that eventually took them to Glastonbury.  “Yeah, we did that one last year.  It’s like Splore on a major level,  chilled but expansive.  It was a major buzz to perform to hundreds and thousands of people like that.  The festival has a great vibe.  People totally get music, not there to just get stoned.  It’s not full of wasted munters who don’t give you any respect.  Glasto is a music lovers festival.  We got a lot of love back.”  Jonny can remember a fair few festivals where the audience totally got into the band’s music.  “But there was one, at a Jazz Festival in South Korea.  We came on after this amazing Funk Fusion band.  They were really cool but the audience we so chilled.  They just sat on the grass, hanging out.  Some had their back turned away from the stage, ignoring it.  We thought “What are we gonna do?”  We’re used to audiences up and going nuts on the dance floor.  We played a couple of songs and no reaction.  It was dead air, man.  Fortunately, Tom had a few mates back at school and he knew a few words from old school friends he’d used to hang with.  So he shouted to the audience “Get Up, Get Down!” (In Korean) and a few other phrases.”  And they all got up!  They are so conformist over there when somebody tells you – you do it.  And they did it!”

So given that success, why is the band splitting?  “Well, it’s that Fleetwood Mac thing’, he says, with a mischievous grin, “All those bizarre love triangles, bound to cause tensions.”  Seriously, though the real, more down to earth reasons are mostly about whanau.  “We’ve all grown up.  Only one or two can carry on the single life. Marty Greentree has family and an office job.  Suit and ties these days.    So have the others.  Each year we come back for touring, having a great time somewhere exotic, with our tail between our legs and have to pick up where we left off.  Our families are looking more and more to us to grow up and settle down to the grind.  Many have day jobs and other things so as we get older it all gets harder to do.  We wanted to go out whilst we were on top – at our height.  Not when we were slipping off the peak.”

Tahuna Breaks will perform two sets on the night including a more intimate acoustic set at the beginning of the show to accommodate their back catalogue, followed by the full ten piece band and guests.