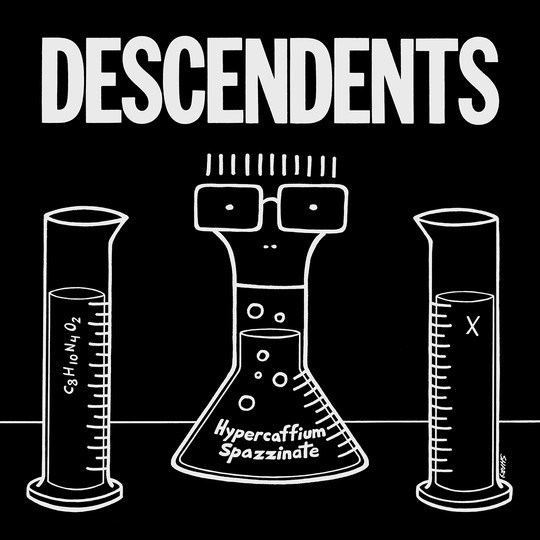 There’s a couple of well-read publications that feature on the shelves of my local supermarket sporting CDs of recently released material and endless rehashes of classic rock era bands.  My daughter calls those mags ‘Dad Rock”.  “How many articles about The Smiths, The Doors and Pink Floyd do I really need?” she asks and compares my own obsessions with her mum’s dedication to watching schmaltz dramas like Grey’s Anatomy.

At the heart, she’s referring to the default position we all head to as we get older, to finding our own cultural comfort food.  And it’s a common thing.  Recently Simon Reynolds wrote Retromania, to explain the phenomenon of endless bands reforming, ‘getting back together’, touring their ‘classic lineups’ despite their initial limited appeal.  It explains the endless Fleetwood Mac tours and why Atomic Kitten has reformed.

Someone out their needs that fix one more time.  So it’s no surprise that Californian punk band The Descendents should want to get in on the act, too.  And no doubt I won’t be the first to realise this.  Fighting the ‘Man’, sticking it to society, morality, the church, whatever.  Same old tired messages but they’re always in vogue. It’s there plain and simple in the lyrics of  We Got to Defeat: “Yeah, the world got to kick my ass again the new is the same as it always ways again”. The whole song’s only 57 seconds long but it’s effective. Just unoriginal.  A simple piece of aural click bait with a simple message – Fight the power. Play, repeat.  Play, repeat.  Yawn.  Big deal. So what.

Over the years the band’s managed to get by trading on their passive aggressive humour through many albums, coasting around the airwaves, narrowly missing the sale bin relegations. To call them punks is probably a bit rich, not that they’ve ever really welcomed the title either.

The band once ironically tried to pass the baton on that label with their own ironically labeled song I’m Not a Punk.   “Show me the way to conformity Try to be different but it’s always the same.”  But whilst they’ve managed to outlast many of their peers they can’t help acknowledging that this whole thing is really a youngster’s game.  After all, nobody wants to watch a bunch of overweight 50’s blokes singing about isolation and rejection.  Oh, hang on?  Wasn’t that the Buzzcocks show?

Rumours of new Descendents material track way back to a 2010 reunion show but at the time singer, Milo Aukerman claimed that these gigs were mere one-off’s, a holiday break from his day job as a biologist.  But eventually, he put academia on the back bunsen-burner when the quartet returned to the stage and studio last year.

Hypercaffium Spazzinate is the is the band’s first LP in over 12 years and like all their material it relies on the same humour, honesty, and personal experience that has always powered their music. Back in the late ‘70s tense four guys from Manhattan Beach were cool, playing cheeky hardcore about caffine highs, girl crushes, and a mandatory hate of parents’, authority.  They were kind of cousins to the more commercially successful Offspring and the way more intense and aggressive bands like Black Flag, TSOL, Soundgarden and Fear.  I always hated Milo Aukerman’s whining vocal style, You’ve got to admire his wit and survival acumen.

Musically, everything on this album is quick and decisive.  All 16 tracks bound along at a pace, with staccato beats and fast, furious guitars but avoid any over-aggression or extensive political chatter.  And I found this particularly disappointing, given how ripe for critique Donald Trump and the whole presidential election climate is right now.  For a band that is so capable of clever ironic lyrics and cutting remarks nothing on this album offers anything of relevance or benefit.  It’s all well played lame duck” Dad Rock”.

Mostly the band keeps to the topics of their earliest days the spastic hardcore of their Milo Goes to College concept and after over thirty years of caffeine-induced shouting and belittling the punk elite Aukerman is still peddling their wares.   So this album picks up where they left off with a continued on food, friends, family, and everything else besides with, perhaps the added perspectives of maturity Informed by inevitable experiences of ageing, fatherhood, death, and responsibility.  But again.  So what?

No Fat Burger Is like part two for 1981’s I Like Food – music’s answer to Food Television’s Man Vs Food show.  The 80’s number was primarily focussed on “juicy burgers, greasy fries, turkey legs,” but the new song is like the aftermath of that blue plat special challenge: “Can’t have no m0re juicy burgers/Can’t have no more greasy fries/Doctor took my lipid profile/He told me I’m barely alive.” Morbid stuff, indeed.

I mentioned Retromania earlier and I think I found the theme song. Limiter is saturated in nostalgic  references accenting ongoing yet tired laments about society’s mounting tendencies to treat conditions like ADHD with drugs and pills (or “limiters,”) instead of proper care: “Whatever happened to drug-free youth?/ What’s to become of our sons, what can we do?” Images from mid-90’s heavy metal videos featuring over crazed teens in straight jackets come to mind.

Ok, so the band do pain like they enjoy it.  But again, again.  So what?  Wrapping up hard edges in irony and sugar pop on acid is all very nice but just so tired. Stephen Egerton makes sure his guitar riffs stay are jagged but melodic, buoyed by Karl Alvarez’s staccato bass beats and Bill Stevenson’s machine gun drumming which switches between cruising 4/4 beats and double time artillery bursts in order to drive home the band’s carefully calculated fury.  But there’s nothing new in all of this.

The album’s closing tune, Beyond the Music is supposed to be a manifesto to the timeless friendship of the band rather than a career prospect: “Frustrato-rock or chainsaw pop/or whatever it is we play/This is our family/And it will always be this way.” It can only be read as some sort of preemptive eulogy or a statement for why they refuse to change or experiment with anything new or creative.  So what?  “We ain’t changing, that’s what.”  Shame really.  If you are planning on making a comeback, whether to get more money, break out of the rut you’ve fallen into lately or just to see if anybody still remembers you, then bring some new material and some new ideas.  Otherwise, release a Greatest Hits album and tour that endlessly and live off the royalties like every other has been the outfit.  Punk’s Not Dead.  Nah.