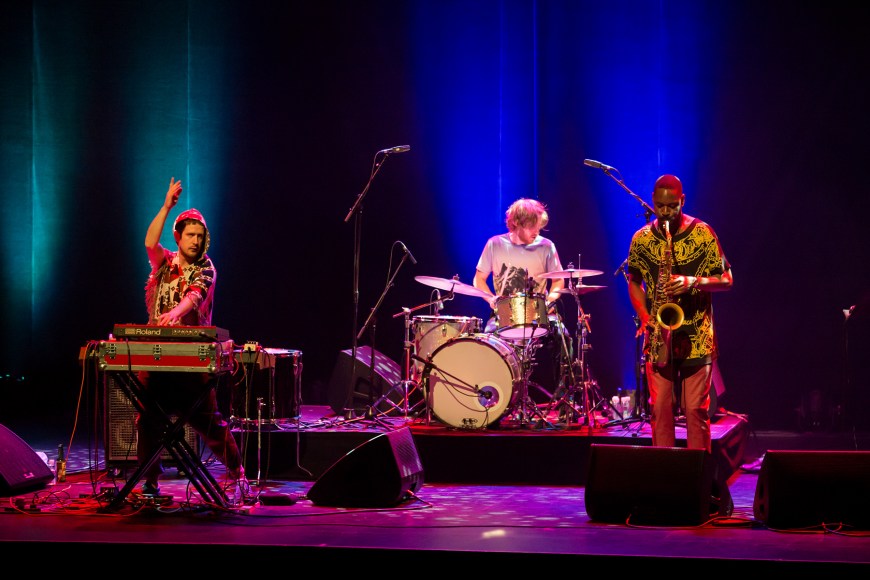 The Comet is Coming came, saw and conquered, leaving an explosion of psychedelic dust in its wake and the uncontrollable urge for Festival goers to get down and boogie. Wellington was passionate about The Comet, nearly selling out the Opera House for their Jazz Festival performance. The Comet took off slowly with a couple of intense and deeply indulgent jams building up layers of funky Herbie Hancock styled futuristic keyboard loops – courtesy of Danalogue The Conqueror (aka Lan Leavers); vibrant counter-rhythms from Betamax Killer’s drum kit and swirly, punchy sax from King Sabaka.  They started this way and except for a short interlude where Danalogue played a short and quiet keys solo continued in full assault mode.  Some of their performance collapsed into deep percussion led rhythmic trances, punctuated by sax and drums which seemed to compete and compliment, simultaneously.

If the Comet’s music was a colour, then they’d be a psychedelic rainbow.  It’s impossible to finger a particular Pantone but let’s just say that this was close to a Pink Floyd 60’s trip out. It was sometimes hard to tell where one ‘song’ began and the other finished but in there I noted their big singles Neon Baby and Do The Milky Way and a new single from an upcoming ep called Start Runnin’.  The first two drew huge cheers as they appeared out of the fog-jam of free jazz mixed with elements of Afro-jazz, Funk and even Soul, creating these recognizable hooks that got all shoulders moving and heads nodding in the seat.  The new single was more of a slow builder, very cinematic, and again referencing the avant-garde side of the jazz spectrum.

This crew managed to do so much with so little, and this is impressive.  The poncho wearing hippy presence of Danalogue, leaning over two simple synth-keyboards was something of an illusion, given the myriad of sounds and loops he produced as he frantically twiddled knobs and consciously pounded keys over and over more like a drummer than a pianist.  Betamax’s drumming was just simply stunning.  Watching him was like a calm and gliding duck – on the surface he was tranquil, but underneath frantic rhythms and counter-rhythms are exploding.  His solo used a mixture of drum kit and a digitised toms to produce some unique and surprising sounds.  These weren’t the usual rolling and building constructions you get with jazz.  He’s like four drum machines all going at once – Drum and bass; Hip hop and syncopation (think Brubeck or Krupa) all at one!  Now while that was impressive, you can’t leave out the stunning energy exuded from King Shabaka’s sax.  Using a simple reverb tool he created layer upon layer upon layer of beats and punches.  His style is more like Fela Kuti than Bird.  The aim is to create these sophisticated patterns, like aural fractals.  It’s more like a texture than a melody that he’s creating.  But wow! What textures.

If I had a grumble, it’s a small one.  Comet’s music is probably more suited to a warehouse party than an Opera House, with many of tonight’s punters being, naturally younger, but feeling a little formality of the of the location.  Many threw off their twinset and pearls and headed to aisles to get down to the groove.  Lighting was adequate but again could have done with a proper video show.  Something with plenty of vintage sci-fi like their music vids.  But that’s just a minor point.  Hopefully, they’ll be back again and we’ll get to see that.