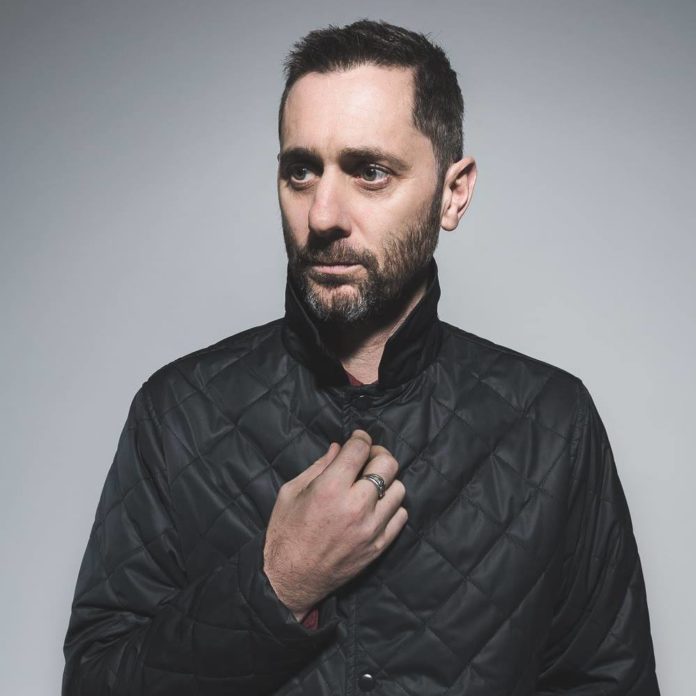 Sola Rosa (aka Andrew Spraggon) is back with a new ep, In Spaces, building on his reputation for creating a wild fusion of genres – everything from hip-hop and jazz, to neo-soul, Latin and funk. This time he’s employing a few Euro-industrial elements as well.

Listeners will be familiar with Sola Rosa’s big hits Del Ray and Turn Around (featuring Wellington’s own Iva Lankum), which dropped back in 2009. Both have clocked up major plays on download platforms and have made Andrew Spraggon’s musical venture a well-known fixture on the festival circuit. Spraggon’s new ep, is a sort of bookend between his last album Magnetics (2014) and his new yet to be finished album.  Just prior to its release on 18 May Tim Gruar called him up for a bit of a catch up about all this.

A bit of Facebook stalking reveals that Spraggon is a repeat visitor to the UK. He tells me that he regularly tours there. Although his original focus was Europe, it didn’t really work out that way.  Partially, this was because of Spraggon’s need to find collaborators like UK based vocalist Kevin Mark Trail (The Streets) who appears on a number of tracks on the new ep, including So Fly and Back to You.

“To be honest, I was finding it harder and harder to find people in New Zealand. The demand, the timings, managers, everything didn’t work out. So, for the last few years, I’ve been travelling between my home in Avondale  and London. There’s so much great talent over in the UK. Like Kevin,” he’s said.  Spraggon regularly pops over to the UK for a couple of weeks at a time to record or tour.  It’s all about collaborations.  Other times he gets vocalists to record and send him their work by email.  Although, he much prefers working live and direct. “Kevin’s back on tour with The Streets.  Hopefully, I’ll work with him again as he’s on some of my album tracks.”

Spraggon felt that his last album was a bit rushed due to various external pressures. But this time he’s going to take his time and do it his way.  He’s found working on an album and an ep at the same time was quite a challenge.  Shifting between the demands of both was a difficult thing. Spraggon would much rather work on one project at a time.

Sonic-wise, he says material on the ep, “is more electronic sounding”. He reckons the shape of his music has changed over the years to the more ‘industrial’ beat driven music it is today.  Originally, his flavours were Latin, mixing samples he’d lifted from old vinyl, dropping in references to Spaghetti Westerns and Mariachi horns.  But like everything, he says, time and tide have reshaped his music.  Working in a collaborative form also does this.

The ‘Kraftwerk’ theme, the look and feel of the EP is partly due to the German photographer who created the cover, Spaggon says.  His influences are unclear but what is crystal is his determination to try out different ideas.  “I’ve always rebelled against any box or label I’ve been put into.  My early music was influenced by the records I was buying at the time and sampling.  I got tired of that and moved on.  I like to experiment with all sounds.  The new album will have some sounds like the Get It Together era.  The new ep is definitely more industrial and harsh.”

One of the ep’s lead tunes is Leave A Light On, an almost industrially stark example, compared to his earlier Latin party funk.  It was written and recorded at his home studio in Auckland and, in the spirit of collaboration, even over long distances, pumped up by keyboardist Michal Martyniuk (Nathan Haines), bassist Matt Short and guitarist Dixon Nacey.  “Then I got Kevin to add these ‘mantra-like’ vocals.  We managed to get him in live, which is how I prefer to work.  Finally, we added the chorus vocals from (Christchurch based) L.A. Mitchell (Fly My Pretties).  She did her part remotely.” The resulting tune is a song of ‘effortless charm’ and simplicity, he says.

Getting LA Mitchell was a bit of a ‘coup’ I suggest. Spraggon describes LA Mitchell as a ‘bad ass key board player’. “Originally Kevin sang every part of leave a light on.  But we weren’t really happy with the chorus, we thought we needed a female chorus.  So we reached out to LA Mitchell.” A good move.

For the track Back To You he roped in up and coming star Kiwi Noah Slee, who he praises for vocal smoothness.  He says that the accompanying video turned out to be something of a mission because the 2016 Kaikoura earthquake had shut down all the bureaucracy in Wellington, including permission to use Army land on the Desert Road.

Spraggon says that after he finished the Magnetics album he had these two ‘leftover’ tracks, So Fly and Back to You.  “I wanted to release them but they didn’t really go with the rest of the album.  So I thought let’s do an ep and work on the album at the same time.  But, to be honest.  It’s not something I’d do again.  I like to focus on one project at a time.”

Spraggon also recruited Turkish producers Flytones from Istanbul.  “I’d seen them on Instagram. “They put up these really awesome, inspiring, clips of their ‘Dilla-esque, neo soul jams’.  So I just contacted them and asked if they’d remix a track and I was stoked that they said ‘yes’.”

Spraggon also managed to rope in a Canadian duo called Potatohead People from the Bastard Jazz label.  He says he’s a huge fan of their underground album BIG LUXURY.

It would be easy to call this ep a fine collection of ‘leftovers, orphans and ‘out takes’ but Spraggon would rather you thought of it as a taster of what might come.  The deadline for the new album is “roughly the middle of next year” – or not. He’s non-committal on that. Whatever the case, this ep will suitably fill the gap.

In Spaces drops on May 18